In areas where Lyme disease is prevalent, another tick-borne illness is popping up that is sometimes fatal. The Powassan virus has symptoms that are very similar to Lyme disease, making it difficult to catch. Some symptoms include headaches, nausea and fever.

The Powassan virus is primarily found in the same tick that carries Lyme disease. However, it is an illness that can pose even more of a threat. Lyme disease can take days to infect a person after a tick has latched on, whereas Powassan virus can be transmitted to you in just hours after the tick has made contact. 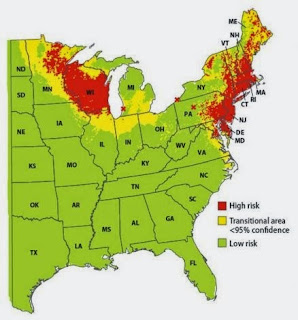 Since Powassan virus is carried by the same kind of ticks that carry Lyme disease, the areas outlined in the map above (primarily the northeastern US and area around the Great Lakes) is at risk for Powassan Virus.

Within two to three hours of being bitten by a tick with Powassan virus, telling symptoms include the development of headaches, nausea, vomiting, muscle weakness, memory loss and difficulty with speech. These symptoms can be similar to Lyme disease, but a difference is that people with Powassan virus will not develop lesions and the “bulls eye rash” that is associated with Lyme disease.

In some cases, the virus infiltrates the central nervous system and causes inflammation to the brain and spine. This leads to encephalitis meningitis.

The biggest concern with Powassan virus is that antibiotics will not be effective, since they are only effective against bacteria. Because of this, many people consider Powassan “untreatable.” They couldn’t be more wrong. Instead of antibiotics, a different form of treatment should be considered. ACS 200 Extra Strength  is a leading evidence-based antimicrobial. Because it is an antimicrobial, it is effective against a large variety of disease causing organisms. They include bacteria, siprochetes, fungus, parasites and, most importantly for Powassan, virus!