A Facebook photo helped one mom diagnose her son’s Lyme disease, which is spread via ticks that reside in grassy or wooded areas. (Photo: Stocksy)

If Karen McGregor had noticed the bullseye mark on her 1-year-old son’s temple at any other time, she may have blown it off as an allergic reaction or a harmless bug bite.

But she happened to notice the bright red rash just a few days after viewing a Facebook post about Lyme disease, one that featured photos of this tick-borne illness’s singular symptom: a red, bullseye rash. Realizing the eerie similarities, she sprang into action. 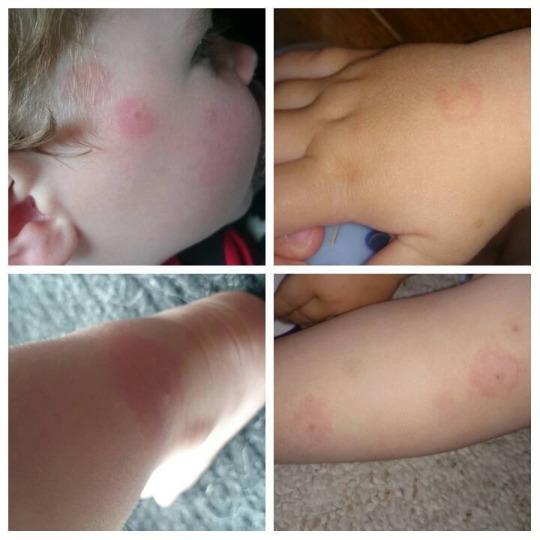 “I phoned our doctor as soon as they opened yesterday and got him in quickly,” she wrote in a Facebook post on June 20 that has since been shared more than 188,000 times. “Within a few hours, more and more of these bullseye spots were showing up on his face, legs, and arms.” Her doctor suspected Lyme and prescribed antibiotics, the usual course of treatment for kids and adults to cure the infection in its early stages.

“We are hoping we caught it in time!” she wrote, adding that she took her son to McMaster Children’s Hospital in Ontario for a second opinion. “Two doctors looked at him and confirmed that it is indeed Lyme disease. The stage of rash indicates it must have been from a tick bite he would have received 3-4 weeks ago (we never even saw a tick…).”

With her son’s close call with Lyme hopefully behind her, McGregor has taken to Facebook to warn parents about this mysterious, hard-to-diagnose illness. She’s included scary photos of her son’s marks, which have a large red raised area with a dark red spot in the center.

After a Facebook post about Lyme disease tipped off one mom that her toddler had the illness, she posted images of her son’s rash so other parents would also recognize this telltale scary sign. (Photo: Karen McGregor/Facebook)

“I encourage everyone to watch for these spots!!” she wrote. “They look just like a bullseye, and had it not been for the post I read, I never would have known it was something more than a simple rash caused by being [in] the long grass! Take a picture with your phone if you see one of these spots on yourself or your family — you might need it to show a doctor down the road what you saw.”

Looking out for this rash is a smart move for parents who live in geographical areas where Lyme disease shows up, namely the Northeast, Upper Midwest, and Northern California, Robert W. Frenck Jr., MD, professor of pediatrics, division of infectious diseases at Cincinnati Children’s Hospital Medical Center, tells Yahoo Parenting. “About 90 percent of Lyme cases happen in these locations,” he says.

The first and typically only sign of infection — which usually shows up two to three weeks after a tiny, speck-size tick transmits a disease-causing organism into the bloodstream — is the bullseye rash. “It’ll be about two inches in diameter, and it can look more like a ring, and it won’t itch or hurt like a regular bug bite or allergic reaction,” says Frenck.

A child who has one or more marks like this on her body should be seen by a doctor soon, but Frenck stresses that it’s not an emergency. “It needs to be addressed, but you have days to get medical attention,” he says. At the doctor’s office, the diagnosis will be made by looking at the rash, and antibiotics are given to KO the infection for good.

However, if a child doesn’t get antibiotics and the rash fades away (it takes a few weeks), that doesn’t mean she’s doomed to develop later stage Lyme disease, which over time can cause serious issues such as arthritis-like pain, Bell’s palsy (a form of facial paralysis), and a nonlethal type of meningitis.

“Most people who get Lyme don’t develop the later-stage symptoms, but it’s important to be treated with antibiotics anyway if you suspect Lyme,” says Frenck. “We have no way to predict who among those who haven’t taken antibiotics will go on to develop later-stage Lyme and who will not.”

With summer here and so many kids playing outside in woodsy areas that are home to deer and the Lyme-causing ticks these animals host, McGregor wants other parents to stay alert.

“Feel free to share this post — I would love nothing more than to have our scary situation educate others about what to look for this summer,” she wrote.

Other Posts You May Enjoy

We Can’t Help But Wonder: How Did All the Hadids Get Lyme Disease?